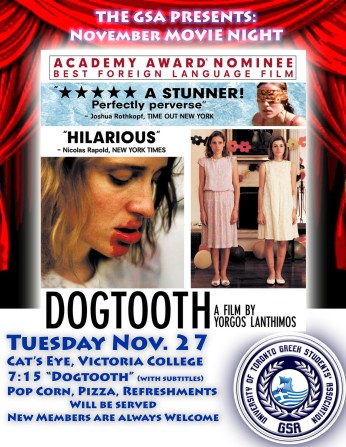 The GSA will be screening the controversial film ‘Dogtooth’ directed by Giorgos Lanthimos. Dogtooth was nominated for Best Foreign Film and has won numerous awards across Europe.

Synopsis:
A married couple and their three young adult children, a son and two daughters, live at the outskirts of a city in a large compound with a garden and a swimming pool. A tall fence surrounds the property and the children have never been on the other side of it, for they are intentionally cut off from the outside world by their parents. They are taught different meanings for everyday words. For example, they are told that a ‘zombie’ is “a small yellow flower, the ‘sea’ is a chair and the ‘telephone’ is the salt shaker. The parents show no sign to the children that their experiences are extraordinary and they promise that each child will be ready to venture outside the compound once she or he has lost a dogtooth. To guarantee the children’s submission, the parents contrast them to an unseen brother who is said to live just outside the compound, where he has been ostracized for his disobedience.

Interesting Fact:
Dogtooth is only the 5th ever Greek film to be nominated for an Oscar. The last film nominated from Greece was Ifigeneia in 1977.

Quote:
Older Daughter: Mother, what is a “cunt”?
Mother: Where did you learn that word?
Older Daughter: On a case on top of the VCR.
Mother: A “cunt” is a large lamp. For example: The “cunt” switched off and the room got dark.